“Winning the Race in the Era of Intelligence”

[12 September 2017, Hong Kong] on September 11th, the White Paper themed by “Winning the Race in the Era of Intelligence” was released together with the Hong Kong X Innovation and Startup Youth Forum was held at Island Shangri-La, Hong Kong to vigorously promote the technological sci-tech innovation development concept and actively respond to the “Guangdong-Hong Kong-Macau Big Bay Area Initiative”. HONG KONG X-Tech Startup Platform (HKX) discussed the road ahead of Hong Kong’s sci-tech innovation development with experts and young entrepreneurs from academia, business, and investment community at the 20th anniversary of HKSAR’s establishment and the 1st anniversary of HKX’s establishment.

Celebrities from all walks of life getting together at the event 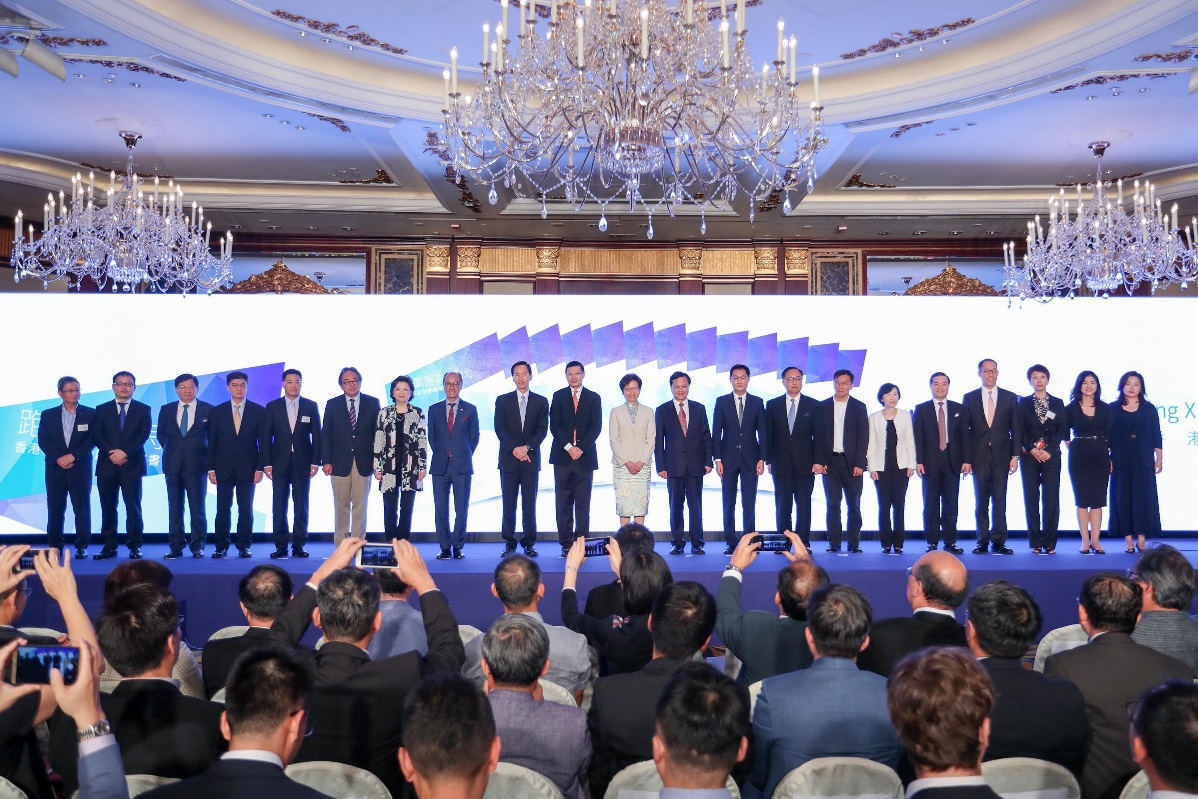 Celebrities from all walks of life attend the event to discuss the future of Hong Kong’s sci-tech innovation development.

Mrs. Carrie Lam addressed the event on site that the SAR government should put more efforts in eight aspects to create a favourable environment for sci-tech innovation and entrepreneurship. First of all, not only the government should increase the investment to universities to help their substantial expenditures in research and development, but also encourages enterprises to investment. Secondly, the government should play a more active role in attracting domestic and oversea talents to retain in Hong Kong, Thirdly, the government will soon initiate a HKD 2 billion innovation and entrepreneurship fund to help startups. Fourthly, besides large-scale infrastructure facilities, the government is also willing to provide more shared working spaces and facilities to youngsters. Fifthly, review the existing laws and regulations and break some regulations that restrict the development of Sci-Tech Innovation. Sixthly, the information owned by the government will be shared and used to help scientific research. Seventhly, the government will take the lead to change the procurement policy and hope this can encourage the domestic companies to innovate. Eighthly, the education system should cultivate students’ creativity and curiosity from basic education. Mrs. Carrie Lam said: ‘The government should communicate and interact with all parties more frequently and act as a facilitator and promoter. The SAR government is willing to lead and win the race in the era of intelligence and make sure we keep abreast of the latest technology.’ 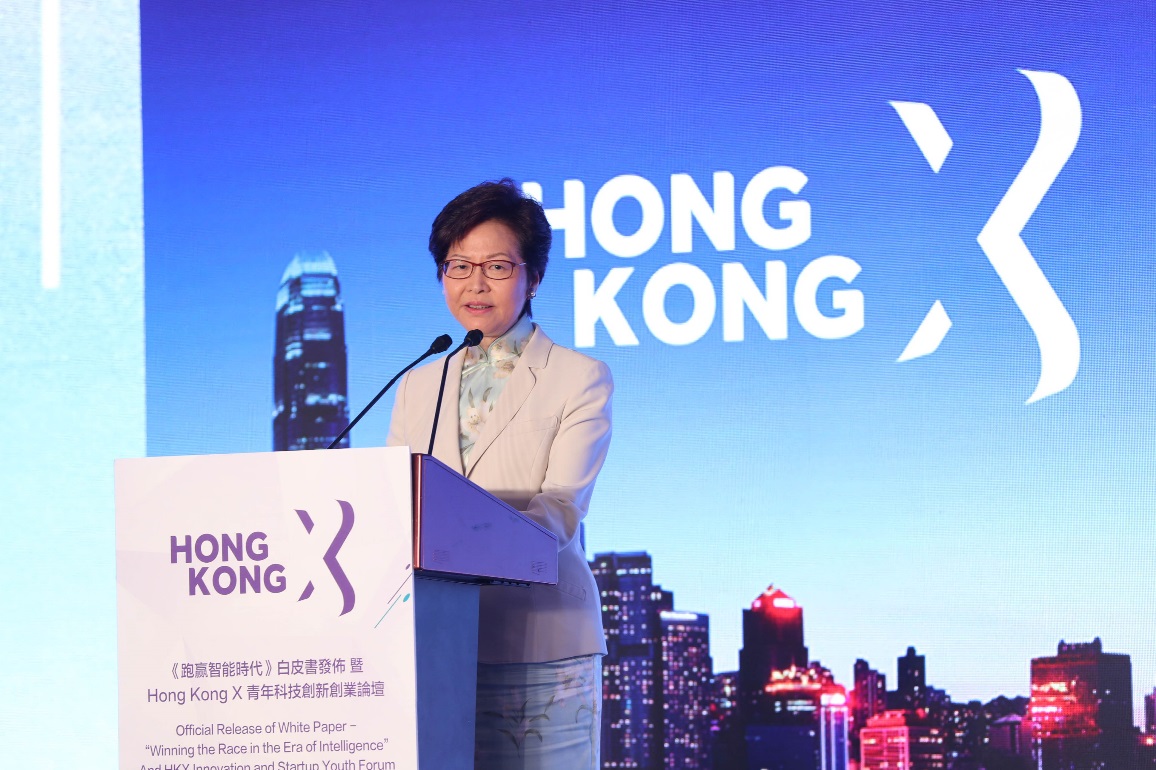 Mrs. Carrie Lam said, ‘The SAR government is willing to lead and win the race in the era of intelligence and make sure we keep abreast of the latest technology.’

Mr. Neil Shen delivered a speech during the event. He reviewed the milestone and achievements of HKX over the last year. Mr. Neil Shen said, ‘The establishment of HKX was an entrepreneurship itself. At the beginning, I had concerns about whether the combination of “incubating by mentors”, “NGO” and “venture capital” business model of HKX would make a success. However, as we look at this moment, the situation is much better than expected. HKX, a startup incubator in Hong Kong, has an outstanding character of “human-oriented”. First of all, in order to retain domestic talents, we should provide a better ecosystem for innovation and technology in Hong Kong. Secondly, we have to attract overseas talents, including talents in Mainland China to Hong Kong. Thirdly, we should improve traditional education curriculum for the need innovation and technology. 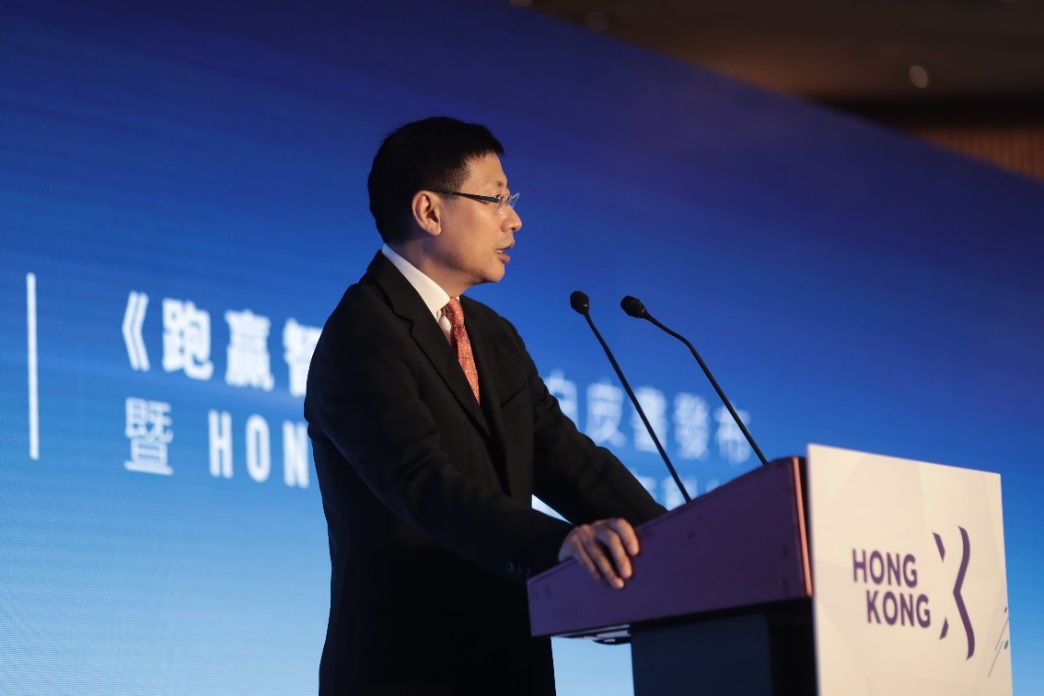 Mr. Neil Shen delivered a speech during the event. He reviewed the milestone and achievements of HKX over the last year.

Mr. Pony Ma brought up his own “Three Key Cards” in his speech. ‘The first card is “Bring In”. I hope the government will adopt more policy to attract domestic and overseas advanced talents. The second card is “Grow Up”. The government should create a favourable environment for the self-development of talents. The last one is “Combine Together”. The joint force of the smart manufacturing industry in Guangdong-Hong Kong-Macau Bay Area, along with the suitable international environment in Hong Kong for advanced talents can be very powerful.’ said Pony Ma. 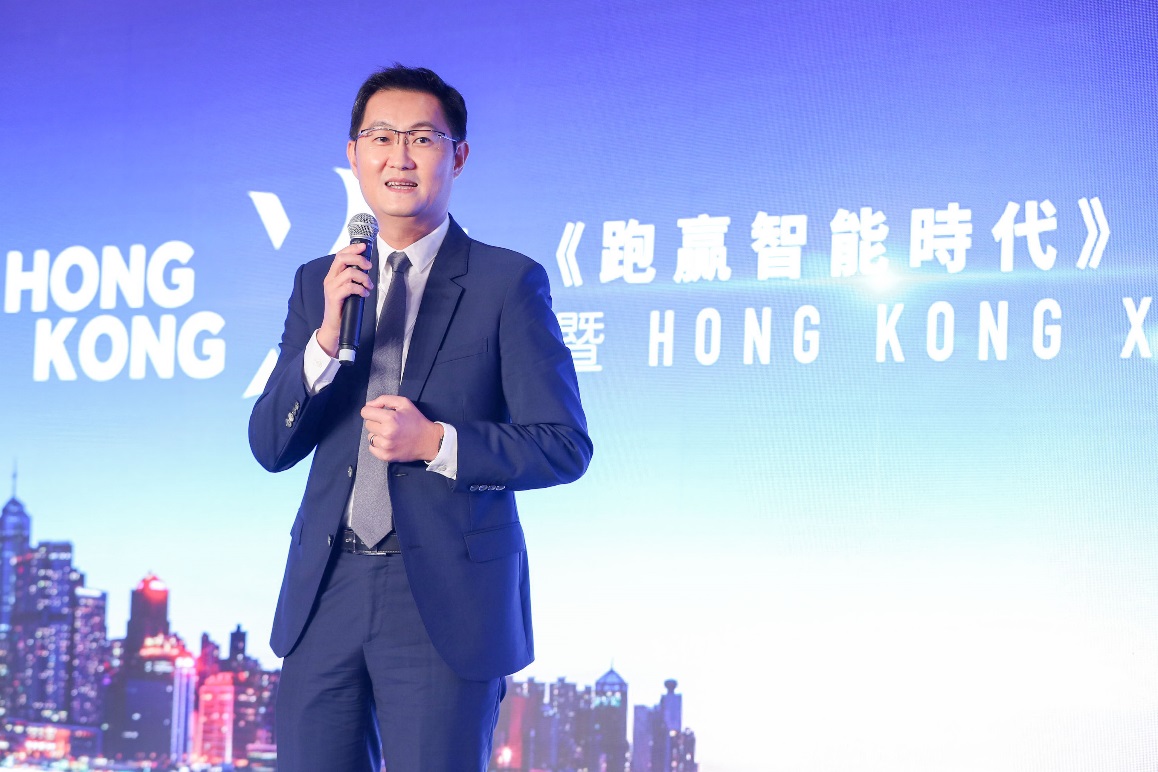 Mr. Pony Ma brought up his own “Three Key Cards” in his speech.

Strategic partners of this event include HKSTP, Cyberport, HKU, CUHK, HKUST, CityU, PolyU and HKBU. Sun Hung Kai Properties and Sino Group are sponsors of the X-Lab co-working space under HXK, while UBS is a collaborating partner. They all play an important role in HKX.

The issuance of White Paper “Winning the Race in the Era of Intelligence” is the focus of this event. The White Paper was initiated by the HONG KONG X Foundation in early 2017 and released on the day of the event. HONG KONG X Foundation is founded by Sequoia Capital China which is an important part of Sequoia Capital China's corporate social responsibility and is dedicated to supporting sci-tech innovation of Hong Kong's youth. Sequoia China has always believed that, vigorous promotion and participation in the construction of a sustainable sci-tech innovation ecosystem as well as spurring the growth momentum for social and economic development are important social responsibilities and values. Under such evaluation, the White Paper was announced on the first anniversary of HKX.


The paper stated that Hong Kong should dedicate itself to the ambition of becoming a sci-tech innovation center of the world, which can compare with Silicon Valley. By creating the ecosystem for sci-tech innovation to be ready for the challenges from technological development in smart era and capture the opportunities brought about by the development of Big Bay Area. The government, enterprises, schools, civil society organizations and various sections of society should work together to promote the innovation, vigorously cultivate and attract young talents with innovative thinking and abilities. Hong Kong should attract world's largest technology companies to come and set up R&D centers and introduce Hong Kong’s own innovative technologies and technical products to the rest of the world. Therefore, Hong Kong can maintain its traditional advantages in the sectors such as financial, trade, and services, as well as bringing new charms to Hong Kong by making the innovative technology as a new growth driver. 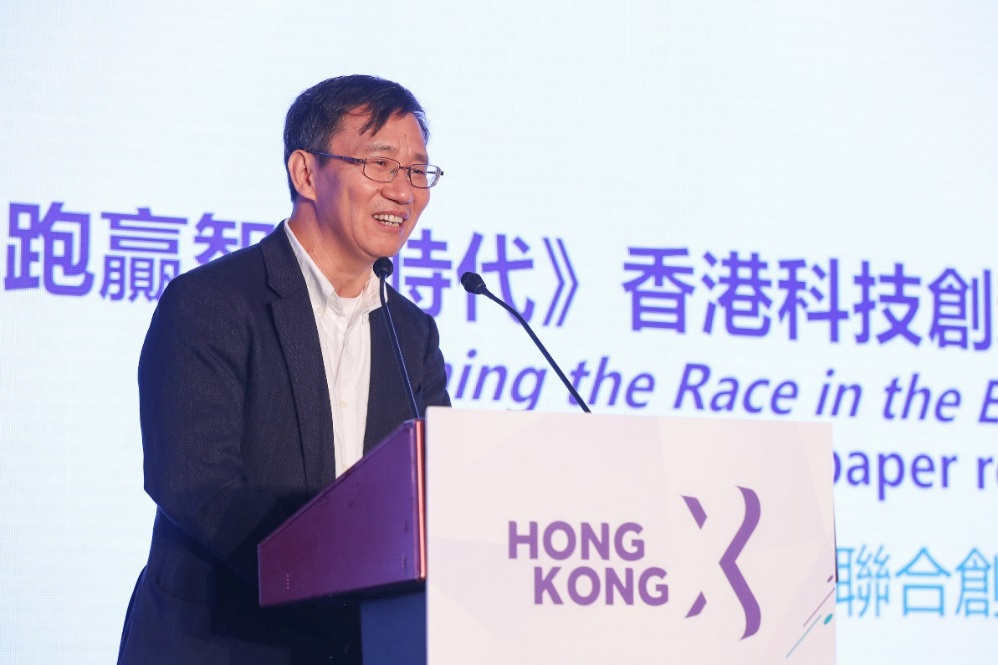 Prof. LI Zexiang interpreted the White Paper themed by “Winning the Race in the Era of Intelligence”

Moreover, The White Paper brought up four strategic proposals: first of all, by creating an International Innovation and Technology Centre in the Era of Intelligence should become the objective of Hong Kong's overall strategic development in the future. The Chief Executive of Hong Kong should lead the promotion of efficient communication and collaboration among various government departments, in order to vigorously promote the innovation and entrepreneurship culture among all Hong Kong citizens internally and actively carry out marketing activities for the city externally. Secondly, the paper suggested that the government should create an open sci-tech innovation ecosystem, promote communication and cooperation between different participants, actively attract global leading enterprises with sci-tech innovation genes, world-class experts in intelligent technology areas and talented entrepreneurs around the world; set up more government-guided funds and attract more investment and attention in Hong Kong. Thirdly, Hong Kong is proposed to make full use of its resource advantages and focus on the development of specific intelligent technology areas, especially focusing on the development of five areas including Big Data/AI, Fintech, Smart city, Robotics and Life sciences and Pharmaceutical. Lastly, Hong Kong should carry out a strategic cooperation with the Mainland China to speed up the construction of Guangdong-Hong Kong-Macau Big Bay Area, to create a new Silicon Valley in the world, and to form an industry chain of “R&D/incubation in HK + Smart manufacturing in Shenzhen/Pearl River Delta region” by complementing the traditional innovation model in Hong Kong with reverse innovation model in Shenzhen. Hong Kong can also help the secondary innovation of the enterprises from mainland China and help them expanding to the international market. In addition, Hong Kong should connect with Guangdong and Macau and gather all the advantages from all three regions of "software, hardware and services" as a whole.


More than a dozen of startups have received investment from HKX, a keen hunter for promising startups

The showcases for some startups which received fund investment from HKX in the last year are displayed at the entrance of the event venue and attracted extensive attentions from the guests. During the event, Prof. CHEN Guanhua announced the list of companies that have received fund investment from HKX, covering a wide range of field like Precivax and Bacmuno in bio-pharmaceuticals field, NanoBioImaging in bio-tech instrument field, Smartsens, Etopus, Efinix and GeneSens in chip design field, SourceBrella in big data and AI field, SeasonaLife in Fintech filed, Viewider in E-commerce technology field, Aromeo and CYC in smart hardware field and various FYPs at the exploratory stage, all of them have shown the unique charms and promising prospects of Hong Kong sci-tech innovation undertaking to the public. 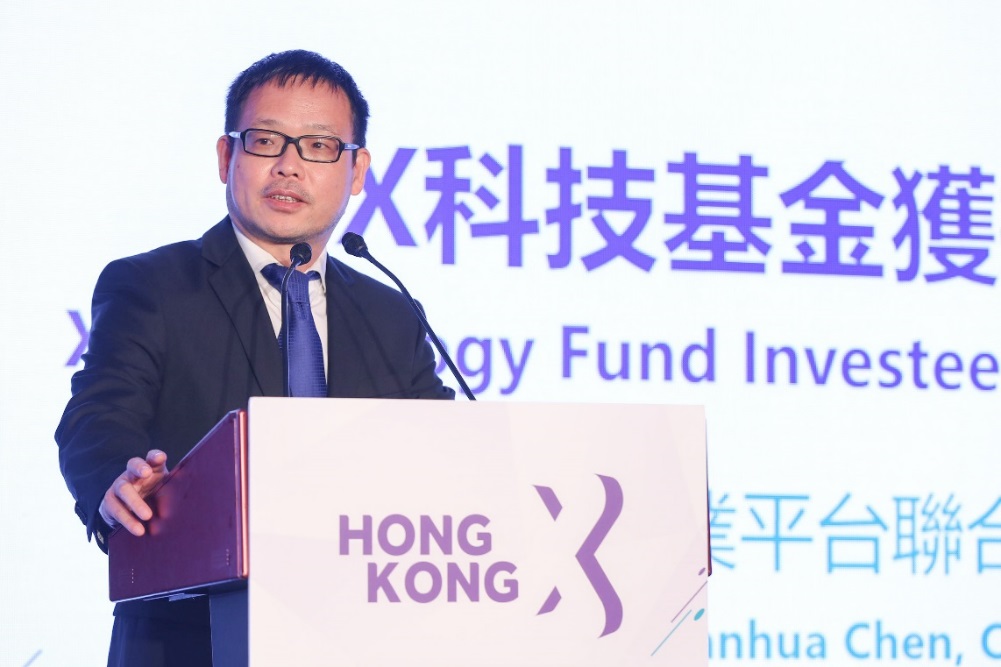 Prof. Guanhua Chen announced the list of companies that have received fund investment from HKX.

Forum about sci-tech innovation, brainstorming ideas that let a hundred flowers in bloom

The first “Hong Kong X Innovation and Startup Youth Forum” was held during the event. Prof. Tony Chan (President of HKUST), was the host of the forum. Nicholas W. Yang, JP, Secretary for Innovation and Technology, Mrs. Eva Cheng, JP, Executive Director of OHKF, Mr. XU Xiaoping, founder of ZhenFund and Ms. Erica Huang, CEO of Techcode Venture and other representatives have attended the forum as guest speakers. Over 400 experts and young entrepreneurs from academia, business, and investment community are very excited interact frequently with the speakers on the stage about how to build Hong Kong into an International Innovation and Technology Centre in the Era of Intelligence.

Looking forward, HKX will continue searching for the scientific and technological innovation potential from Hong Kong's higher education institutions and encouraging young people in Hong Kong to innovate and start their own businesses under the background of global innovation and entrepreneurship. People from all walks of life should work together to further propel the diversified development of Hong Kong economy. “Let us win the race in the Era of Intelligence.”